Scorpio and Taurus • Compatibility in Love, Sex, and More 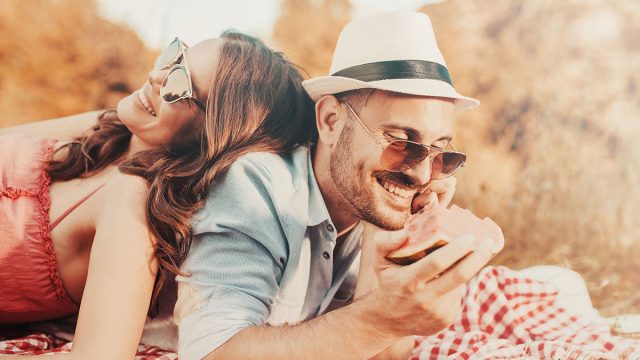 Scorpio and Taurus are opposite on the zodiac wheel, and these two are a case of “opposites attract”!

These two are often an excellent match. They balance each other out well and understand one another in a way other signs don’t.

Taurus and Scorpio are often attracted to one another right away. They might seem very different at first, but they have just as many similarities as differences once you get to know them.

Both Scorpio and Taurus are stubborn and possessive, but they can use those traits to strengthen their bond if they play their cards right.

Scorpio and Taurus will often be in an intense relationship. Whether these two are together long-term or have a casual fling, it will be a relationship these two remember for a lifetime!

A Scorpio-Taurus friendship has the potential to be a strong friendship based on trust and mutual respect.

This can sometimes seem like an odd friendship to outsiders. Laidback Taurus and intense Scorpio are opposites in many ways, but that makes their friendship exciting for both of them.

Scorpio and Taurus sometimes seem like such a strange pair to others because their friendship often isn’t harmonious. These two are both stubborn and will argue sometimes, but that usually doesn’t stop them from being friends.

If you see a pair of Scorpio and Taurus friends arguing, there’s usually no reason to be worried about it. They are the type to have friendly debates and will try not to push each other’s buttons while “fighting.”

Both Scorpio and Taurus are slow to trust people. They often develop an understanding with each other because of this. Oddly enough, they also tend to find it easy to trust one another.

Taurus is honest and straightforward. They are also extremely loyal. No matter how suspicious Scorpio might be of them initially, Taurus will show Scorpio they can trust them. They are unlikely to break that trust either.

Some people are intimidated by Scorpio’s intense nature, but Taurus rarely will be. They are oddly good at seeing the gentle, loyal person Scorpio is beneath the surface.

If a Scorpio-Taurus pair doesn’t have a lot of interests or hobbies in common, that will rarely be a problem for either of them.

Both like doing things alone, and they might enjoy hanging out and doing different activities while sharing space.

When these two bond, it is often for life. Scorpio is all-in once they decide somebody is their friend. Taurus will be there for their friends no matter what, and it takes a lot to push them away!

Even if things get complicated, Scorpio and Taurus can maintain their friendship. As long as neither person does anything to genuinely betray or hurt the other, they will typically remain friends for a very long time.

The Scorpio-Taurus relationship is often a highly physical and passionate one. Their love is not quiet. Taurus might be able to calm Scorpio down a bit, but emotions will still run high in this relationship.

Scorpio’s compatibility is higher with a partner they can trust unconditionally. It can sometimes take a while for Scorpio and Taurus to develop this deep trust in one another, but it’s possible.

Taurus is also slow to trust, so they may initially seem closed off to Scorpio. This might make Scorpio suspicious. Once Taurus gets more comfortable with Scorpio, though, both will be able to trust one another more.

Once that trust is developed between Scorpio and Taurus, breaking it won’t be easy. Taurus is a loyal, stable partner, though. They will do their best to keep Scorpio’s trust.

Taurus’ compatibility is sometimes higher with a partner who can challenge them. Scorpio can do this!

Taurus is not lazy, but they can sometimes become complacent. They get a little too comfortable with their routine and need someone who will shake things up sometimes.

Scorpio is a sign that is all about change and transformation. They will push Taurus to be the best they can be. If Taurus is willing to listen to Scorpio, Scorpio can bring out the best in them and help them reach their goals.

Both Scorpio and Taurus are also highly ambitious, even if their ambitions don’t always align. These two can learn how to encourage and push each other in ways that will help them both lead the best life possible.

Overall, this is often a mutually beneficial relationship. Taurus will give Scorpio a sense of stability. Scorpio will bring excitement and drive into Taurus’ life.

These two can have a great relationship. Even if they have problems now and then, both Taurus and Scorpio are not the types to walk away from a good thing just because of a few minor issues.

A Scorpio-Taurus marriage will be strong as long as it is based on love and mutual trust. This can be one of the most solid marriages for either sign.

A Scorpio man and a Taurus woman’s compatibility will be high because a Scorpio man will devote himself to his Taurus wife. He will do whatever he can to make her happy.

A Taurus woman will be just as loyal to her Scorpio husband! She will make sure to spend time with him and love him the way he wants to be loved.

Scorpio women can be intense, but that intensity is rarely a problem for a Taurus man. Even if she gets controlling or possessive, a Taurus man will be able to calm her down and work through it.

This is a strong marriage because Scorpio and Taurus both take it very seriously. These two usually bond in multiple ways, so breaking that bond and ending the marriage will be difficult.

Even if Scorpio and Taurus are having trouble in one area of their relationship, the other areas will remain solid enough to make up for it.

For example, if Scorpio and Taurus are having trouble connecting emotionally, their physical and intellectual connections will make up for it.

If these two are having trouble in the bedroom, their love for one another will help them through it. They will be able to weather the storm together as long as their overall bond isn’t broken.

Both Taurus and Scorpio make each other feel secure. Taurus knows that Scorpio loves them and vice versa. They can work through issues because they know it will be worth it.

This is rarely a boring marriage. Scorpio will happily sit around with Taurus sometimes, but they’ll also push Taurus to get out of their comfort zone. These two know how to have fun together and keep their romance alive.

A Scorpio and Taurus in bed together can have some of the most mindblowing, powerful sex of their lives.

Scorpio and Taurus’ attraction to one another is intense. This isn’t necessarily a good thing, but their sex life will usually be good regardless of how functional the rest of their relationship is.

Taurus is highly sensual, while Scorpio is strongly linked to all things sexual. Both want to experience physical pleasure by any means possible, and they will be able to do this together.

Taurus and Scorpio will often be sexually attracted to one another right away. This is a relationship that might be all about sex at first.

It’s common for Scorpio and Taurus friends to become friends with benefits. Even if these two don’t feel a romantic bond, it can be challenging for them to deny the physical attraction they feel for one another.

Taurus and Scorpio often use sex to work through things in their relationship too. If these two fight, it’s common for them to make up using sex.

Even if they work through “negative” emotions in the bedroom, the sex will still be great for them. Sex is often a strong emotional and physical outlet for Scorpio and Taurus couples.

These two can balance each other well in the bedroom. Venus rules Taurus, and Mars rules Scorpio. Taurus can bring out Scorpio’s gentle, tender side, while Scorpio can show Taurus how much fun it can be to experiment and get wild in the bedroom.

Scorpio can usually push Taurus to try new things better than other signs. Taurus is one of the few signs that can get Scorpio to calm down and settle into a routine.

These two will be able to get what they want because they can quickly figure out how to switch back and forth between their differing sexual styles.

The connection between Scorpio and Taurus in the bedroom runs deep. Regardless of what kind of relationship these two have, sex will likely play an essential part in it.