9 Clear Signs That a Sagittarius Man Loves You Like Crazy 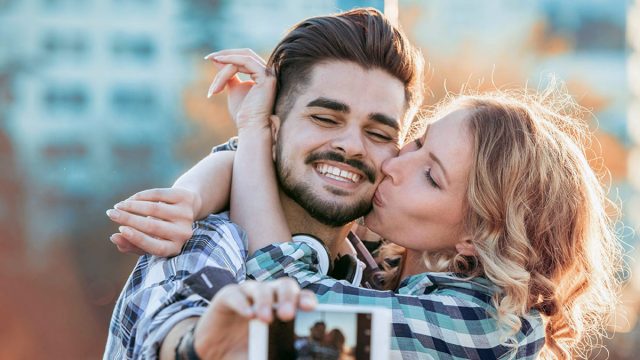 It’s easy to spot a Sagittarius man’s love signs if you know what to look for. He’s pretty obvious when he’s in love.

He is a very generous, loving partner. He’ll always make you feel special whenever he’s around you.

You’ll be able to tell that a Sagittarius man is in love with you because he’ll spend more time with you than he does with other people. He won’t be around 24/7 but he’ll want to keep you in his life.

When he loves you, he’ll also talk about having a future with you. He’ll include you in his future goals.

One of the signs a Sagittarius man has feelings for you is that he’ll be very generous with you.

Some Sagittarius men are generous in general. He might be very giving when it comes to his friends. He might also give to charity or volunteer his time.

He’ll be even more generous with you, though. He’ll constantly be giving you little gifts and trinkets to show how much he cares about you.

Pay attention to how he acts with other people. If he’s not any more generous with you than he is with his friends, he might just be interested in you as a friend.

If he is always going out of his way to treat you, that might mean he loves you. If he takes you out on expensive dates or constantly pays for trips for the two of you, he cares about you a lot.

Even if he’s not able to buy you expensive things, he’ll still try to give you things to show he cares. He might make gifts for you, constantly bring you coffee, or do other small things.

Longing to win the heart of a Sagittarius man? Put him under your spell...

When a Sagittarius man is madly in love with you, he’ll want to be more open with you. Being open with somebody about his feelings is difficult for him. He might not always succeed but he’ll try.

A Sagittarius man isn’t emotionally open with everyone. He might even have a hard time being open with his close friends and family.

He will try to be open with the people he loves, especially if he’s interested in a long-term relationship with somebody.

He knows that being open with somebody is vital in any relationship. He will do his best to always be open and honest with you.

Be patient with him as he’s trying to open up to you. It might take him a while to fully open up but he will do it if he loves you.

When a Sagittarius man says he loves you, he means it. That’s not something he says just because he wants something from you. He will only say that if it’s true.

3. He Wants You Around

One of a Sagittarius man’s weaknesses in love is his fear of becoming less independent. He doesn’t want to give up any of his freedom.

If he wants to spend a lot of time with you and he’s willing to give up some level of freedom, that means he cares about you.

He won’t spend every waking moment with you, no matter how much he loves you. He will still be a free, independent person.

He will reach out regularly to spend time with you. If he hasn’t seen you in a while, he might message you asking if you’re free to hang out soon.

He may spend more time with you than he does with other people too. He’ll want to be around you more than usual when he loves you and you make him happy.

When he starts planning some of his life around your schedule or bringing you along to events he’d normally go to alone, he’s showing you that he cares. He wants to have you around.

Looking and finding love with a Sagittarius man doesn't have to be impossible! Here's how...

When a Sagittarius man is in love with you, he’ll have a legitimate interest in your life.

He will ask you personal questions. He isn’t being nosy. He legitimately wants to get to know you better.

He’ll actively listen whenever you are talking to him. He’ll be interested in hearing about things that you are interested in. Even if it’s not something he knows about, your excitement will be enough to interest him.

He will also want to get to know your friends and family. If somebody is important to you, they’ll be important to him as well.

When you want to talk about work, he’ll listen to you. When you tell stories about things that happened in your past, he’ll be actively interested in everything you say.

A Sagittarius man likes to know what is going on with the people he loves. He’ll never ignore you if you want to show him some pictures of a trip you went on or tell him how your day was.

5. He Asks About You

If he is constantly asking mutual friends about you, that’s a sign a Sagittarius man secretly likes you.

He might ask about you if he hasn’t heard from you in a while. He doesn’t do this to be nosy or controlling. It’s a way he shows concern.

He might also ask friends about your likes and dislikes. He does this so he can figure out what kinds of dates to take you on or what kinds of things you might like as gifts.

He will of course also ask you to tell him about yourself. He’ll inquire about your family, your past, your job, etc. He’ll gladly listen to anything you want to tell him.

6. He Makes Time For You

One of the ways a Sagittarius man expresses his love is by having quality time with his partner. If he loves you, he’ll be sure to make time for you.

No matter how busy he is, he’ll always make sure he has time to see you or talk to you.

He might do things like schedule regular phone calls or date nights. He will do everything in his power to make sure that he’s able to spend time with you frequently.

When he’s not able to see you for a few days, he’ll still reach out. Spending time with you will make him happy when he loves you. He won’t want to be away from you for too long.

Some Sagittarius men are more physically affectionate than others. If he loves you, he will be more affectionate with you even if he’s normally not affectionate.

This is another way he’ll be generous with you. He’ll always be willing to offer a hug if you need it. He’ll want to be physically close with you in a way he isn’t with anyone else.

He might sit closer to you than he does to other people, for example. He might keep a hand on your knee or around your shoulders while you sit together.

This magic will make your Sagittarius man want a relationship with you.

If you want to know how to tell a Sagittarius guy is serious about you, pay attention to how he talks about the future.

When he includes you in future events or discusses how you play into his goals, that means he’s serious about you.

It might be a small comment here and there. He may ask if you’re available to go to an event with him that’s a year out, for example. He might talk about things that won’t happen for a while as if you’ll be there with him.

He will also consider you when it comes to making big decisions. If he gets offered a job in another city, he might ask you if you’re interested in moving with him before he accepts the offer.

If he starts to say things like, “When we get married…” instead of, “If I get married…” that is a definite sign that he loves you and he wants a committed relationship with you.

9. Less Flirtatious With Others

One obvious way to know if a Sagittarius man loves you is that he’ll become less flirtatious with other people, especially when you’re around.

Sagittarius men are the type of people who flirt for fun. His flirtations don’t always lead to anything more, especially if he is already in love with someone.

He’ll consider your feelings when he’s talking to other women. If he knows it bothers you, he will try to not flirt with other people when you’re around.

Even when you’re not around, he will be less flirtatious. He won’t turn up the charm as much as he normally would. When he is flirting, he’ll make it clear that he’s just having some fun.