Is Virgo Man Jealous and Possessive in a Relationship? 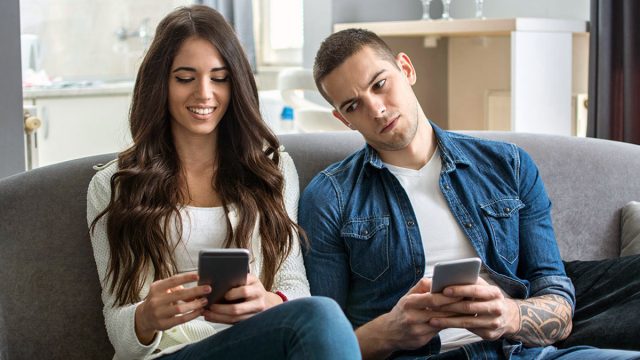 You won’t always be able to tell when a Virgo man is jealous or possessive. He hates any show of emotion that makes him seem irrational.

Many Virgo men are insecure, so they do get jealous. They just don’t always act on it.

Virgo men hate deception and betrayal in relationships. If he’s been hurt before, a Virgo man might feel possessive sometimes just because he’s trying to protect himself.

If a Virgo man does get jealous, he will try to think logically about the situation. He won’t act impulsively out of anger just because his partner is talking to another man.

Virgo men will often be jealous in silence. They hate making a scene. A Virgo man also doesn’t want to make his partner feel bad if she didn’t do anything wrong.

Are Virgo men possessive of their partners? Being possessive isn’t a key part of a Virgo man’s personality. When he does get possessive, it’s usually for a good reason.

Virgo men hate it when their partners deceive them. If your Virgo man ever feels like you’ve lied to him, he might start acting in ways he usually doesn’t.

A Virgo man might start acting possessive if he feels like he can’t trust his partner for some reason. He may become controlling or hypervigilant to ensure his partner isn’t lying to him or being unfaithful.

If you cheat on a Virgo man and he forgives you, he will likely become very possessive of your relationship afterward. He will make sure that everyone knows you’re in a relationship with him and that you’re off-limits.

This one weird trick is the only way to attract a Virgo man.

When a Virgo man is possessive over his partner, it sometimes has nothing to do with the way his partner behaves. His possessive nature can be caused by his insecurities.

Many Virgo men aren’t confident in themselves. They might feel insecure about their relationships.

Your Virgo man’s insecurity might cause him to cling to you and seem possessive or overprotective. He does this because he’s worried you might leave him if he doesn’t spend enough time with you.

His insecurities can also make him jealous of people who seem more confident or sure of themselves than he is. He might become jealous of a male friend of yours, for example, if he seems self-assured.

You might not be interacting with this male friend in a way that suggests you’re cheating or that you have feelings for him. Your Virgo man may be jealous anyway if he thinks your friend is better than him in some way.

Virgo men are insecure. They are also overly critical of themselves and the people around them.

A Virgo man’s critical nature can cause him to look down on himself. He may become jealous of other people his partner interacts with if he perceives them as being more “perfect” than he is.

Your Virgo man’s critical nature might also cause him to overthink the way you talk to other men. He might start to criticize how you speak to others if he thinks you’re too flirty with people who aren’t him.

A Virgo man’s self-criticism might also stop him from acting on jealousy. He may convince himself that he’s just overthinking or making mountains out of molehills.

Even if his partner is doing something to make him reasonably jealous, he might talk himself out of thinking so.

You might miss some of the signs a Virgo man is jealous. He will purposely try to hide his jealousy from you.

A Virgo man might decide that his jealousy is his problem. He will try to just let it pass. He won’t want to bother his partner with his feelings.

Virgo men often like to keep their feelings to themselves. They don’t like big emotional displays. Unless he thinks he needs to address an issue with you, he’ll deal with his emotions on his own.

When a Virgo man does display jealousy, it’s usually in private. He will discuss things with his partner away from prying eyes. He isn’t going to make a fuss in front of other people.

You won’t have to worry about your Virgo man picking a fight with someone he thinks is flirting with you. He will either ignore his jealousy or talk to you when you two are alone.

Virgo men are analytical people. They like to think everything over before they act.

If a Virgo man starts to feel jealous, he will reflect on why he’s feeling jealous. Is he jealous because his partner has done something to warrant his jealousy, or is he behaving irrationally?

He will try to consider why you might be spending less time with him. If you’ve been talking a lot to another man, he will think things over to decide whether or not your interactions are strictly platonic or not.

Sometimes, a Virgo man’s analytical nature will help him talk himself out of jealousy. He will realize that nothing is going on.

Other times, a Virgo man’s analytical nature can work against him. He might overthink and overanalyze a situation. He may end up coming to a conclusion that is entirely off-base.

What happens when you ignore a Virgo man? He may sit around being silently upset until you start paying attention to him again. The same thing will happen if you do something to make him jealous.

If your Virgo man thinks you’re trying to make him jealous on purpose, he will act like he’s not. He won’t want to give you the satisfaction of knowing you got under his skin.

If he gets jealous, but he doesn’t think you’re trying to make him feel that way on purpose, a Virgo man won’t want to bring up his jealousy to you. He doesn’t want you to feel like he’s accusing you of anything.

A Virgo man will likely stay silent about his jealous feelings until they go away on their own. He will only talk to his partner about them if they are persistent or causing a problem in the relationship.

Virgo men hate making a scene. Even if he’s overwhelmed with jealousy, your Virgo man won’t act out because of it.

A Virgo man is unlikely to confront a man who has been talking to his partner. He doesn’t want others to think he’s brash or irrational.

Virgo men aren’t the type to start a fight because someone else is flirting with their partner.

If your Virgo man is jealous and wants to confront you about something, he will do so in private. He will also only do this after carefully thinking things over first.

A Virgo man’s actions when he feels possessive aren’t dramatic or overbearing. He might privately ask you not to hang out with a particular person. He may be a little more clingy in public. He won’t cause a public scene, though.

This is the #1 mistake women make with a Virgo man...

Virgo men are highly attentive partners. They enjoy spending time with their partner and will expect that she makes time for him as well.

Ignoring a Virgo man might make him feel jealous. If you choose to hang out with other people instead of him, you’ll make him feel bad. He tries to make time in his schedule for you. He expects the same.

When a Virgo man misses you, he might seem more clingy than usual. He’s not trying to seem possessive. He just wants to spend more time with you!

Your Virgo man will want to spend as much time with you as he can. He’s a busy person, so that might be difficult at times. When he can spend time with you, he wants you to be there for him.

If a Virgo man seems controlling at times, it’s likely because he can be very protective of his partner. Virgo men will do whatever they can to keep the people they love out of harm’s way.

Virgo men aren’t protective in an aggressive way. Your Virgo man isn’t going to fight any man who looks at you the wrong way. He will, however, suggest that you avoid certain people if he thinks they have bad intentions.

Your Virgo man isn’t trying to be controlling or jealous if he asks you to stop talking to a certain person. He is likely just trying to protect you! He might legitimately think that person isn’t good for you.

Is your Virgo man painfully distant? Rekindle your love.

If a Virgo man loves you, he will do his best to treat you well. Virgo men are naturally nurturing with the people they love.

A Virgo man won’t act on jealousy because he wants to care for his partner. He doesn’t want to make her feel bad or feel like she’s responsible for his emotions when she’s not.

A Virgo man’s behavior when in love is sometimes caring to the point of self-sacrifice. He might convince himself that his partner isn’t doing anything wrong, even if she is because he doesn’t want to rock the boat.

If your Virgo man gets jealous, he will try to ignore it to spare your feelings. He might think that telling you he feels jealous will make you feel like he’s accusing you of something.