Easy Guide To Elicit a Text Response From a Capricorn Man 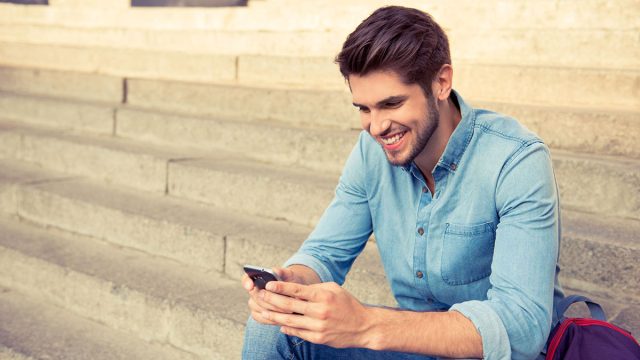 A Capricorn man’s text responses are often brief and concise. When he does respond to you, don’t expect long, elaborate messages.

If he’s not responding to you, there’s usually a specific reason why. You might need to change your texting style to get a response.

Capricorn men don’t often chat just for chatting’s sake. He isn’t often going to text you “just to talk” and if you do that to him, he isn’t likely to respond right away.

If you want him to respond, you need to have a purpose behind your text. You can ask him a question, tell him you need to talk to him in person about something, or say you’d like to make plans.

If you tend to ramble in texts, try not to do that. He might just ignore your message.

A Capricorn man’s communication style is direct and to-the-point. He doesn’t have time for small talk.

If you need to text him about something, just get to the point!

If you send him multiple texts in a row or you send him a huge wall of text, he might not take the time to read what you’ve said.

He’ll do this for a variety of reasons. If he’s busy, he’s going to save it for later. If you want a quick response, you’re not going to get one!

He also just doesn’t like texting sometimes. He might ignore the text and ask you what you wanted to talk about when he sees you in person instead.

He may also just not be able to figure out what your point is if you send a long message. If you’re just telling him a story, he might not think it requires a response either.

Don’t beat around the bush. If you have something to tell him, just say it!

Don’t just say, “Hey are you busy this week?” say, “Do you want to go to the movies on Thursday night?”

If you need to talk to him about something, don’t just say, “We need to talk”. That sounds ominous and worrying to most people.

Instead, say exactly what you need to talk about. Let him know whether you’d like to talk in person or if a quick text conversation will suffice.

If you aren’t sure what to say to a Capricorn man when you text him, you should probably wait until you actually have something to text him about.

He is more likely to respond to a text if you have a reason for texting him.

If you text him with an unrelated comment or go off on a tangent, he’s more likely to abandon the conversation to just ignore that message. He might be waiting for you to get back to the point.

If you text him out of the blue just to chat, you need to have a purpose behind your text message. You need to give him something specific to respond to.

If you just send him a meme or tell him a silly story, he’ll look at it, but he isn’t always going to respond. He might not think he has to.

Are Capricorn men good communicators? They often are but the way they communicate might just be different than how you do.

If you send a text that he doesn’t think requires a response, he’s not going to respond.

If you want a response from him, you need to make it clear that your message requires one. The best way to do this is to ask him a question.

If you text him to tell him a story about something that happened to you that day, follow it up by asking him what he did that day.

If you send him a funny picture or a joke, ask him what he thinks about it.

Long, emotional messages are not usually what a Capricorn man wants to hear from you when you reach out.

If you two are close, he might be willing to be a sympathetic ear in person. Reach out and let him know that you’d like some company in that case.

For the most part, your texts should be practical and free from too much emotion. You can still have fun with him and joke around but avoid overly emotional discussions.

If you need to talk to him about something important, don’t do it over text. Reach out and see if he has time to talk to you on the phone or meet up with you in person.

It’s hard to read tone over text as well. If you’re getting emotional about something, he might not always be able to see that’s what is happening in a text conversation.

If a Capricorn man doesn’t initiate contact with you for a while, the worst thing to do is to keep pestering him with messages.

He doesn’t respond to texts for a variety of reasons. He might be busy. He might be focused on something else. He might be thinking about his response before he replies.

If you ask him a question and then immediately send another text right before he has a chance to respond, he might start to feel overwhelmed.

If you text him constantly, that might make him think that you’re clingy. He might also feel stressed out because he’s not able to reply to you fast enough.

If you keep your text conversations pressure-free, he’ll be more likely to respond to you instead of ignoring your messages.

If a Capricorn man has stopped texting in the middle of a conversation, there’s probably a good reason for it. You don’t need to text him more than once if you were the last person to say something in the conversation.

You don’t need to follow up with multiple texts. He’s either noticed your text and is going to respond later or he hasn’t seen your message yet.

If he’s in the middle of something and you send text after text, you’re going to annoy him. He’s more likely to put his phone on silent or mute your conversation than to reply to you right away.

If there’s an emergency and you need to get his attention right away, call him! Texting isn’t sufficient if you need him to respond immediately.

A Capricorn man’s texting habits are very schedule-based. He doesn’t often send personal texts during work, for example, unless he has to for some reason.

If you want him to respond to your text, you need to text him during a time when he’s available for a conversation.

If you know that he’s out with friends, don’t text him and expect a prompt reply. He’s focused on his friends and he isn’t going to ignore them so that he can text you.

If it’s late and you know he normally goes to bed at a certain time, don’t text him. Unless it’s an emergency, you can wait to contact him until the next day.

The key to learning how to communicate with a Capricorn man is to keep messages short and sweet.

He can sometimes get overwhelmed by long messages. He might not know what to focus on. He may not be able to figure out what you’re trying to ask him or if you even need him to respond to you.

If you send him a short, simple text, it’s going to be obvious what you want.

He’ll also be able to read the whole text if he’s just viewing a preview on his lock screen instead of opening the message.

If he glances at his phone and sees you’ve asked a short question, he’s more likely to open his phone and respond to you quickly.

If a Capricorn man is not responding to your text, don’t fret over it. Just be patient.

You shouldn’t assume the worst when a Capricorn man is not responding to your text right away. He’s not the kind of person who always responds instantly to every text he gets.

If you just need to chat with somebody and he’s not responding quick enough, leave him alone. Reach out to somebody else and wait for him to be available.