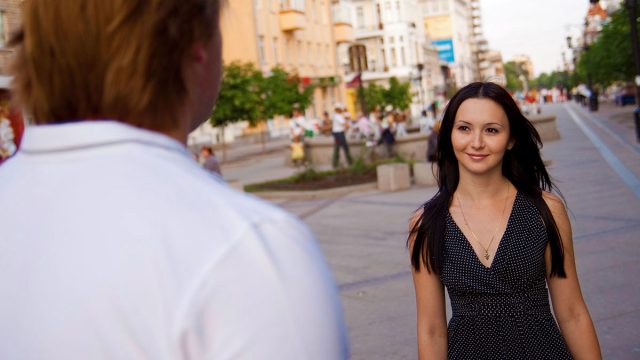 To attract an Aries man, you need to stand out. Aries men won’t notice you if you’re standing in the background.

You can catch an Aries man’s eye by being flashy and seductive. Don’t reveal everything, though. Aries men also love a good mystery.

You need to be upfront and confident to attract an Aries man. Aries men don’t always notice subtlety. If you want him to know you’re interested, you need to flirt boldly and make yourself known.

Once you’ve caught an Aries man’s eye, you can keep him around by complimenting him and being supportive. Build up your Aries man’s ego, and he’ll love being around you.

Aries men love exciting people. Show him that you’re interesting and fun. Your Aries man will be attracted to you if he has a good time with you.

When flirting with an Aries man, don’t be subtle. Be upfront about what your intentions are.

Aries men don’t always pick up on subtle cues. You might think you’re being coy and flirtatious while he has no idea you’re trying to express interest.

If you want to attract an Aries man, you need to make it obvious that you’re interested in him! Don’t be afraid to be a little forward.

Be upfront about who you are as a person. Don’t feel ashamed of who you are or try to hide any aspects of your personality.

An Aries man will appreciate it when he knows who you are and what your intentions are.

If he’s not interested in a relationship and you are, for example, he can easily let you know that right away, so neither of you wastes your time.

Is your Aries man not communicating with you? Here's the trick to reel your Aries back in.

If you want to attract an Aries man, you can’t be shy. You can play coy sometimes, but you need to put yourself out there if you want him to notice you.

You won’t catch an Aries man’s eye if you’re a wallflower. It’s not that he dislikes shy people. He just won’t see you standing there, especially if other people are trying to get his attention.

You need to make sure that an Aries man notices you. Be confident, and don’t be afraid to approach him when you see him.

An excellent way to meet an Aries man is to go to parties. If you don’t usually do that, step outside your comfort zone.

If you two have mutual friends, it will be easier to get attention from him if you two attend the same events.

Play Hard To Get

If you want to make an Aries man obsessed with you, play hard to get! Aries is the type of man who loves it when women do this.

Aries men are competitive. If you play hard to get, he will rise to the occasion. He will want to make sure that you notice him.

Once you’ve expressed interest in your Aries man, back off. Make sure he knows that you have other things going on in your life.

You can flirt with other men in front of an Aries man while you’re playing hard to get. You can’t do this with all men but feel free to with an Aries man.

He won’t get so jealous or upset that he backs off completely. He will likely see the other men as competition and do what it takes to make sure that you choose him over them.

Let Him Chase You

Aries men do love it when women are bold and upfront. Once you’ve expressed your interest, though, let your Aries man chase after you.

Aries men love a challenge. They are highly competitive, and they are willing to work to get what they want!

Let your Aries man take control of the relationship once he knows you’re interested in him. He will gladly take over and start pursuing you.

If you are constantly pursuing an Aries man, he’ll get bored. He might also feel like you’re too controlling if you’re always pushing him to do what you want.

You can sit back and relax sometimes. Wear a nice outfit, flirt a little, and let your Aries man come to you. Allow him to chase after you and do some of the work.

If you want to attract an Aries man, show off your assets! Make sure he sees what a fantastic physique you have.

Wear form-fitting clothing when you’re around your Aries man. If you think you have good legs, show those off! If you’re confident wearing low-cut tops, do that.

An Aries man will notice you if you show up to a party in a sexy outfit. He won’t be able to keep his eyes off you.

Be as forward as you want to be when flirting with an Aries man. You want to make sure that he knows how interested you are in him.

Aries men won’t mind if you get a little physical while flirting. Feel free to brush your hand against his. Press your thighs together if you two are sitting by one another. Stand close and lean in toward him.

Don’t worry about scaring your Aries man off. If he’s not interested, he’ll let you know! If he is, he’ll keep flirting with you.

Send him some flirty messages or pictures if you’re trying to attract an Aries man through text. Make it very clear that you’re interested in him and show off how attractive you are.

The secret to developing a good relationship with an Aries man is to be supportive. An Aries man needs somebody who can help lift him up when he needs it.

It’s one thing to attract an Aries man with your body or your charm. If you want him to stick around, you need to show him that you can be supportive.

If he tells you about a project he’s working on, encourage him! Listen to him when he’s telling you about things he’s interested in.

An Aries man will gladly flirt with you. He might even have a one-night stand if that’s all you’re looking for. If you want to attract him and keep him around, be supportive.

Longing to win the heart of a Aries man? Put him under your spell...

What does an Aries man like in a woman? He likes somebody who will compliment him and tell him how great he is.

Aries men have a huge ego. They love it when other people recognize their positive attributes.

As long as you are sincere, your Aries man will love hearing compliments from you. Tell him everything you like about him. That will definitely attract him to you.

If you aren’t sure how to text an Aries man, try sending him a few compliments. Tell him that you liked the outfit he wore the last time you saw him or that you enjoyed a photo he posted online.

What are Aries men attracted to? They tend to like women who are a bit mysterious. They like it when they have to work to get to know a woman better.

This is related to an Aries man’s competitive nature. A mysterious woman is a bit of a challenge. He loves challenges.

Don’t tell him your whole life story if you’re talking to an Aries man. You can answer his questions and get to know him better. Don’t freely offer up every detail about yourself, though.

You want to make sure that an Aries man has a reason to keep seeing you. Drop a few hints about yourself. Let him know some interesting facts. Leave him wanting more. It will drive him crazy, wondering what else there is to know about you.

Aries men are always on the go. They need a lot of action and excitement in their lives. If an Aries man is bored, he’s okay with running off to do something else.

You need to be exciting if you want to attract an Aries man. If he sees that you’re also always on the go, he’ll be interested in you.

Show your Aries man that you have a lot going on in your life. Do a lot of activities, go to many parties, and socialize with people often.

Aries men are often into sports too. If you enjoy doing a particular sport, show him that! You can play with him or invite him to watch you play a game.

If an Aries man ever seems bored around you, mix things up. Suggest a new activity for you two to try. You can also invite him to do something active, like hiking. Aries men enjoy working up a sweat.