How To Flirt With an Aries Man Through Eye Contact 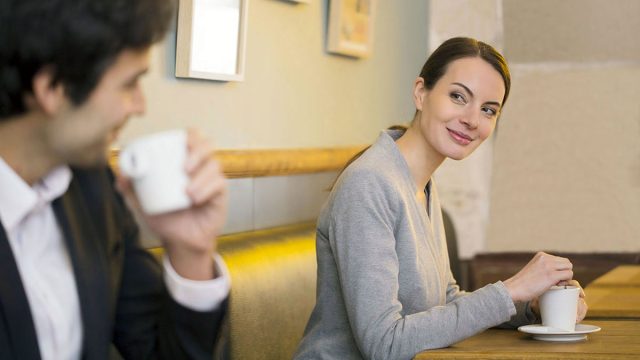 An Aries man’s eye contact can be intense. Some people even find it intimidating!

Aries is ruled by Mars, so everything he does has a competitive edge to it, even flirting. When you flirt back, be just as bold as he is.

Flirting with an Aries man is easy when you know what to do. Sometimes, you don’t even need to use words! All you need to do is use your eyes.

A bold, smoldering look will let an Aries man know you’re interested better than any words you could possibly say. When he feels your gaze on him, he’ll know you’re trying to flirt.

Do everything you can to convey your emotions in your gaze. You’ll be able to flirt with him from across a room or in situations where you two can’t talk.

The sign of Aries rules the head and this includes the eyes. This is often one of an Aries man’s favorite features on a woman.

If you want an Aries man to notice you, you can do certain things to highlight your eyes.

If you’re sending photos to him, adjust the lighting so that your eyes look their best. You can do this with photo filters but don’t go too wild! You still want your eyes to look natural.

You can also highlight your eyes with makeup. Proper use of eyeliner will make your eyes look larger and draw attention to them. A bold eyeshadow will do this as well.

If you wear bold eye makeup, then make sure the rest of your makeup is more understated. You want him to look at your eyes, not your bold lip or bright cheeks.

If you don’t normally wear a lot of makeup, even something as simple as mascara will go a long way toward highlighting your features.

You can do your eyebrows as well or wear a small amount of highlighter on your brow bone and under your eyes. This will draw his attention toward your eyes.

Is your Aries man not communicating with you? Here's the trick to reel your Aries back in.

An Aries man’s body language and facial expressions aren’t always the most open. You should keep your expressions honest and open, though, to show him that you’re interested.

Aries men don’t like to feel like their emotions are being toyed with. If you say one thing but your eyes say another thing, he won’t want to pursue you.

Gaze at him with an open expression. Try to convey that you really are interested in him and that you aren’t just playing games.

He won’t care if you’re just flirting with him because you’re interested in sex. In fact, he might be totally down for that!

If you’re physically attracted to him, show that in your face. If you’re interested in more than that, you can show that too. You want to be honest with him about your intentions.

Look Across the Room

If you are occupied in a conversation across the room from Aries, you can still flirt with him! Gaze at him intensely until he notices you’re looking at him.

Sometimes, a quick, sultry look is all it takes to get his attention. He’ll be able to tell what your intentions are and he may approach you later when you two aren’t busy.

You can use this technique whenever you two aren’t able to be in close proximity. Get the flirting started early on so that you can heat things up later.

One of the signs a shy Aries man likes you is that he’ll look at you from across the room whenever you two are in the same place.

You want to show an Aries man that you are bold and confident. If you’re trying to flirt with your eyes, don’t look away from him!

If you catch him staring, hold eye contact with him. You don’t want to be the one to look away first.

Use Your Whole Face

Flirting with your eyes isn’t just about the eyes. Even if he’s focused on your eyes, an Aries man will be able to see your whole face.

Use this to your advantage. Smile at him, in a way that is as sultry and seductive as possible. Brush some hair out of your face or twirl a curl close to your face. This will help draw even more attention to your features.

Do what you can to make sure your face is clean and as clear of imperfections as possible. You don’t want him to be distracted by smudged lipstick or splotchy skin.

Use your eyes for more than just making eye contact too. You can flirt by looking at other parts of his body.

You can look him up and down, in a way that makes it obvious that’s what you’re doing. Stare at his lips longingly to make it clear you’d like to kiss him.

If you want to learn how to know if an Aries man wants you back, pay attention to what he does when you do something suggestive or flirty.

Look him dead in the eye while tying a cherry stem with your mouth or seductively licking an ice cream cone.

Use your gaze to draw his attention to other parts of your body. If you two are holding eye contact and you quickly glance down to your chest, for example, he may follow your eyes.

Lick your lips while staring at him. Hold out your chest. Run your fingers slowly across your neck in a way he won’t be able to resist.

When you do things that are suggestive while holding eye contact, he’ll know you’re doing them on purpose to rile him up.

Aries has an intense gaze naturally. If you don’t, you may want to work on that.

You don’t want there to be any doubt about your intentions. You want him to know that you’re flirting with him.

When you maintain deep, intense eye contact with him, he won’t be able to mistake it for anything other than flirting!

If you are a naturally shy person, you can practice maintaining eye contact with other people. You might not want to try your eye contact flirting techniques with Aries until you’re ready.

If he’s being intense, don’t back down. You don’t want him to think you’re intimidated or that you’re not actually interested in him.

Do everything you can to show him that you mean business. When your stare is intense and you refuse to look away, he’ll be able to tell you’re serious about your flirting.

When He’s Not Looking

Learning how to read an Aries man is difficult but the more you pay attention to him, the easier it will be.

When he’s not looking at you, you can still use your eyes to flirt with him. If you gaze at him intensely, he’ll be able to feel your eyes on him.

He might pick up on the fact that you’re staring and look over at you but he might not. You shouldn’t necessarily take this as a bad sign.

If he’s not interested in you, he’ll still look over at you. His expression just won’t be a flirtatious one.

When he’s not looking at you, you should still look over at him. If he can’t help but look back, that’s one of the signs an Aries man has a crush on you.

What does it mean when an Aries man stares at you? It might mean he’s interested in you. He’s not going to bother paying attention to somebody he’s not interested in.

An Aries man’s flirting style is usually very bold. He doesn’t hold back when he wants something. He’ll stare at you intensely. Some people are intimidated by this.

Everything is a competition with Aries. If he’s staring you down, he might be doing it just to see how you react. Challenge him right back.

You can raise an eyebrow or wink at him to show that you know what he’s doing. Let him know that you’re onto his tricks.